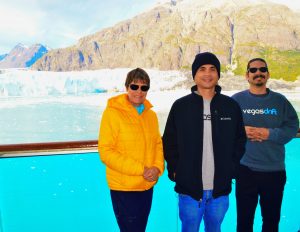 We began the summer staring at the serrated face of Mt Denali at 20,310 ft. in our twin-engine Navajo Piper and in spirit, followed the medical rescue route of the Iditarod Competition some 1,049 miles from Anchorage to Nome Alaska.

We end our summer odyssey on a new photographic voyage that will take us to the mythical Northwest Passage, following the sea lanes charted by Captain George Vancouver, aka Captain Horatio by the Royal Navy; followed by Bush Pilot excursions to Revillagigedo Island and other glacier landings off Alaskan southern coast.

We leave from Seattle’s historic Smith Cove waterfront on W. Garfield St, boarding our ship the HMS Discovery, aka the Ruby Princess.At exactly 4:00pm, two long blast from the ship’s horn, alert all passengers and crew of our imminent departure, as the Ruby Princess’s diesel turbine engines slowly churn the blue and purple oil stained water beneath, effortlessly moving her graceful tonnage into the Puget Sound Channel.

Standing on the Dolphin Deck balcony of our Mini-suite, we wave to acknowledge the throng well-wishers on the waterfront pier who wave their salutatory valedictions to their friends and relatives who accepted the Ruby Princess’s magical voyage through Puget Sound and the entrance of Northwest Passage through the Salish Sea. From their Emerald Deck Balcony of their mini-suite, we could see our sons, Nick and Wes, performing their nautical goodbye etiquette to crowd of well-wishers.

With our baggage safely stored in our Mini-Suite on the Dolphin Deck, Diane and I find solace, after a long travel day from Las Vegas in the Nightskywalker Club, viewing the silhouette of Seattle’s skyline slowly disappearing below the eastern horizon, while enjoying a cup of Starbuck’s Nitro Cold Brew and a blueberry scone.

As with every Cruise the mandatory safety muster is always preceded by the Dinner broadcast. We chose “Anytime Dining” in the 5 major dining areas of the ship, but tonight we dress for Dinner in the Botticelli.

As we pass Port Townsend on our starboard and with the dusk fading in the west, the colors of the night sky meld with the fading sunlight into a purple haze. On the night horizon Ursa Major explodes in the celestial firmament giving us a true north, as the Ruby Princess hugs the coast of Vancouver Island at 20 knots. Fully enveloped under the night’s diamond skies with Polaris aka the “North Star” pointing the way through the Inside Northwest Passage, we sail into an unexpected angry sea with passengers scrambling to the ship’s infirmary for their expected scopolamine patch. Our first night was an exceptionally rough start for this 8-day sail, but we navigate with the appreciation of the ship’s navigational instruments and the skills of its Captain and his XO to elude in our mind’s eye the rogue icebergs and white squalls, the true monsters in the Ocean of Souls.

Unlike my imagined evening activities on Vancouver’s HMS Discovery, the Ruby Princess offered its crew and its passengers an evening of nostalgic reveries with songs from the late Eisenhower years played in nightclubs bistros reminiscent of the Mambo Palaces of the 1950s.
Ketchikan, Alaska
With dawn introducing its face on our portside balcony, we wake to the ships sound of 6 bells, as we quietly dock at 7:00am in our third port city of Ketchikan located on Revillagigedo Island so named by Captain Vancouver. A light morning shower greeted us, an expected welcome for its visitors to the Rain Capital of Alaska. The Tule fog lifted by 11:00am offering a panoramic view of the Island in our single engine Float Plane.

This colorful city nestled in Tongass National Forest projects a sentiment a familial community where isolation is the resident’s bond of survival. For Las Vegan City Slickers like Diane an myself, we wouldn’t last one winter in this town its citizens call home.

It was early as we entered Alaskan waters viewing Cape Ommaney from our portside balcony still heading north to the Chatham Strait passing Fredrick Sound, Stephens Passage and the Gastineau Channel. We finally moored at Franklin Dock Juneau

After a very rough crossing, we docked in Juneau, Alaska only to be greeted by an uncharacteristic brilliant blue sky and an orange globe that added a celebratory ether for locals and tourists alike. From our portside balcony several foreign ships had filled the docks with an outpouring of 20,000 vacationers added to the local population in this charmed Alaska Capital.

Disembarking from our ship was an organized procession from the Fiesta Deck Level 6 that required only our ship ID card. Once on terra firma, we were greeted by our Helicopter Tour Guide, and whisked away to the airport where our Helicopter to the Mendenhall Glacier waited on the tarmac. With a few safety tips from the pilot and the issuance of our mandatory Glacial Boots, and Headsets, we boarded this whirlybird that lifted effortlessly to the eastern mountain passes to the Glacier. Our pilot, Kyle, could not have been more that 24 years old, but after rising 7,000 ft thru our first mountain pass, his skill level was only an afterthought. After passing several minor mountain glaciers we landed on the Mendenhall Glacier, 18 miles long, a half a mile wide, 1800 feet deep, and moving at 6 ft/year to the ocean. We were greeted by Glacier Experts who gave a true meaning to the formation of this glacier and the effect of “Global Warming” in this northern latitude.

After an hour trek and drinking pure century old glacier water on the Mendehall Glacier, we boarded our helicopter for the Salmon/Crab Feast that offered a luxurious venue of gourmet delicacies that complimented the whole Juneau dining experience.

Walking the town of Juneau offered a number of cultural education sites including their Heritage Museum, the Locally Owned Heritage Coffee Shop and the well-attended Cannabis and CBD Oil establishment.
We leave Juneau with a positive tourist experience boarding our ship at 4:00pm, and sailing north to meet the National Park Rangers at Glacier Bay National Park at 7:00am.